Hello there reader! I hope you had a good Christmas/holiday season and haven’t had that extra layer of S.A.D. from the crappy, cold & cloudy winter weather! 😉 Even though January is considered the most depressing month, I’m encouraged still, because it’s a new year and hibernation from the cold seems like a natural time for introspection, reflection, goal-making, starting new; working on the path of self-actualization. And this New Year has already been particularly life changing for me.

In December, it was so nice to connect with friends and family during the holidays, but it was also one very long month! I had one of the most depressing days after Phoebe hardly slept at night (and it had been a year and a half of sleep deprivation). But crazily, the next night, she magically slept through the night. It’s always darkest before the dawn! Anyways, I made an appointment with a psychiatrist to get help with being diagnosed and treated for ADHD and tt felt like FOREVER until my appt in January finally arrived!

But wait, what?! How could I have “Attention Deficit Hyperactive Disorder”…? I’ve always been the “star employee,” an overachiever and very creative, so it may seem like it’s not something I was dealing with. But that’s exactly it, I had been trying to over-achieve too much. My brain is very hyperactive creatively and my over-ambition was not only causing a pile-up of overwhelming unfinished projects, it was also taking my focus away from my relationship and home.

It’s like I was one of those plate spinners on stage with multiple spinning plates on stilts trying to balance and keep them spinning. Each plate balanced all the different things I could do, like re-selling, a cleaning side hustle, a monthly newsletter, doing commission paintings, a painting party business, renovating projects, and everything else. (And my mind was STILL racing at night about how I could make money on a new side-hustle, or another new fascinating creative idea.) 😱 I was a hoarding unfinished projects, procrastinating, and so distracted with all these things I wasn’t even cooking ONE meal for my family, on my phone too much, and not paying enough attention to Travis. I felt overwhelmed by the chaos, burnt out, anxious/depressed, couldn’t focus because ALL the things were asking me to focus on them. I felt convicted and like a failure. My priorities were OUT OF WHACK and I hit a breaking point. In December I decided to put the brakes on everything and just focus on my HOME (housework & family) as the number one priority, like the base of a pyramid. Because I realized: if my home is neglected and I’m surrounded by chaos, then there will be a block to my creative energy & mindset from being able to try to manifest the dreams & hustles outside the home. But if my HOME is “zen,” and cared for, then I may have more creative energy to pursue extracurricular dreams. It felt depressing letting go of the things I wanted to do (and still want to do), but I really need to focus & reset my priorities first. 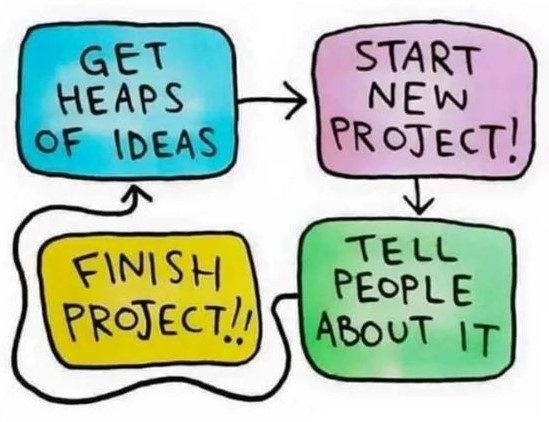 It’s still hard because there’s so much I still want to do, but it feels like I don’t have the time or space to focus on them. I don’t want my own procrastination to be another layer of obstacle. I didn’t really seriously consider that I could have adult ADHD until I came to this point of desperation and started researching about it. It’s genetic & I’m pretty sure it runs on my mom’s side of the family. Since preschool, I’ve been hyperactive and getting in trouble for it. And while the school wanted my parents to medicate me in kindergarten, girls usually tend to fly under the radar of getting diagnosed, because we are more socially adaptable and display ADHD traits differently. I remember being trouble for the teachers as they tried to tame me. My best friend & partner in crime, Patrice, and I were convinced the school system conspired to separate us since the 1st grade and henceforth, until the remainder of our time in the public school system. When we finally did have a class together Senior Year we were suspended, we entertained crazy ideas like breaking into the school at night, and started a gang.

It turns out that some adults don’t even get diagnosed until they are in their 40s…or even in their 80s!! So, if you think you might be dealing with undiagnosed ADHD, consider talking to a psychiatrist about your symptoms & history, because it can really be life-changing.

ADHD can actually provide some real benefits, and some people say it can be a super power…..

Super Powers of people with ADHD:

I can definitely relate to these super powers! For example: at MaidNaturally I excelled greatly at my job because each house cleaning we did was timed, which meant that we had to clean like we were Olympic athletes going into battle against time and grime. It meant that it provided the norepinephrine my brain used to enter into what psychologists call “flow state.” I had this ability to hyper-focus and it was awesome! It felt like my brain was “in the zone.” I could manage several employees, communicate with customers, and complete my area with speed and detail, all at the same time. If I wasn’t feeling completely exhausted, I was hyper. I realize I might have been “too much” for some people who were the more laid-back types, as I remember one particular moment I was disagreeing—now agreeing—with the lady who said “I think you have too much energy.” I joked back at her and said crazy-eyed, “well I’m still in my 20s—maybe this is the energy I’m SUPPOSED TO HAVE!?” 🤡

But as my friend John Goldsworthy says, “every strength can become an over-strength.”

Being ambitious is great, but if you’re overly ambitious, it can take your attention away from your family. Hyperfocus is great superpower, but when you have a hyper mind in a distracted environment, it’s hard to focus on only what’s right in front of you.

What can make ADHD a “disorder”?

Medication is one side of treatment. I have been putting in tons of effort into behavior management already. I have an entire system of organization on my white board with sticky notes, a daily planner, schedule unfinished projects, and make lists. I’m very goal oriented and driven, but I have to say that ONE WEEK after starting medication I finally started a painting I was paid to do SINCE JUNE OF LAST YEAR. 😲

And since starting ADHD medication, I have more of a sense of hope. I’m more attentive and have more energy for Phoebe. I feel more capable to do the things I need to do and the future seems brighter.

Before my brain needed an “emergency” or norepinephrine stress response to begin a task, like the dishes, or unfinished project, but now I just DO it. It’s way easier to initiate tasks, which means an end to chronic procrastination!!!

Jessica McCabe, owner of a YouTube channel called “How to ADHD” did a TedTalk where she described taking medication as “putting on glasses” for her brain. For me, it feels like someone has flipped a switch in my brain from “not now” to “now.” I can even leave the house like it’s no big deal. I am freed from this constant craving in my brain to seek some sort of stimulation. I feel more power, control, and a sense of freedom & ability in myself.

The person who will get in your way the most in your life is yourself, and with all my creative dreams, I don’t want to get in my own way, and I’m TIRED of so many things getting’ me tripped up!! I feel like life just keeps piecing itself together and getting better little by little. Taking action to get diagnosed has probably been one of the best things I’ve ever done for myself and I am hopeful more than ever before to get all these haunting unfinished projects out of my way so I can dream & do what I love.

Again, if you think you are dealing with the constant battle of those symptoms, I encourage you to seek help, because it will help you find more power, understanding, and freedom.

4 thoughts on “Diagnosed with ADHD at 34 years old”